The domes of St Basil’s Cathedral.

St Basil’s Cathedral stands as a monument to a peculiarly Russian type of excess: the interior plastered with gold-encrusted icons, the electric brilliance of the multicoloured roofs of its nine component churches, the sticky closeness of the endless horde of sweaty tourists – I had not expected Russia to be such a colourful place! I had also not expected Russia to reach temperatures of 30oC every day. I had not expected Lamborghinis in the streets, gold leaf by the bucketload, or a restaurant called ‘The Idiot’. Clearly Russia is a place that defies expectations.

I had the opportunity to travel to this somewhat controversial part of the world seven months before Sochi and less than a year before Russia’s relationship with much of the rest of the world began to deteriorate rapidly. I count myself extremely fortunate to have visited while I had the chance. My travels took me only to Moscow and St Petersburg – two tiny specks in a nation covering one-eighth of the world’s total land area, but two tiny specks that kept me run off my feet trying to see all the sights in the mere six days that I had! 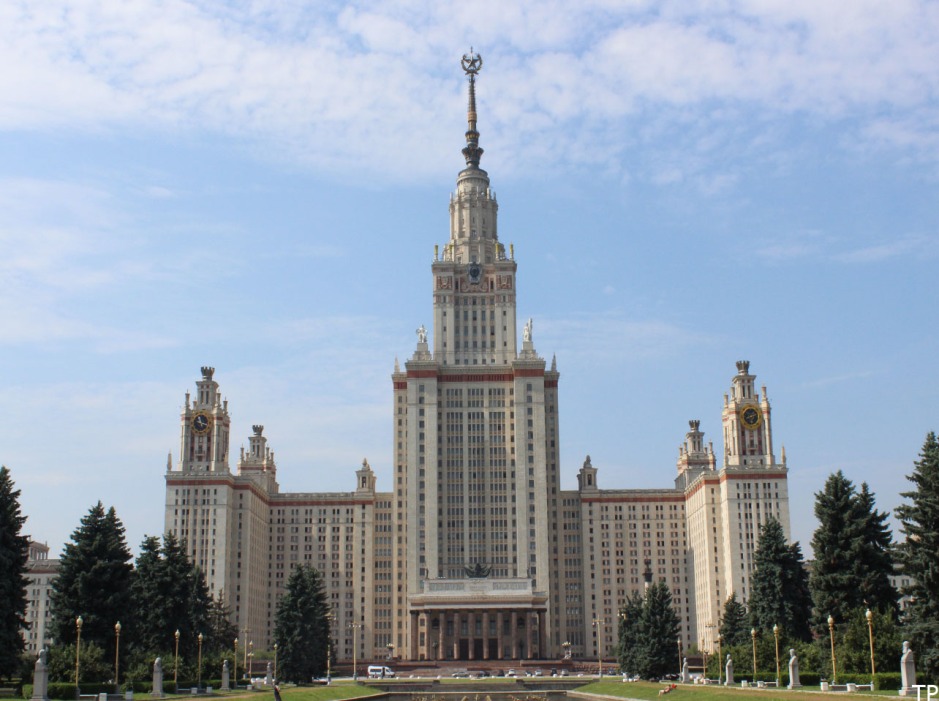 The administration of Moscow State University is housed in one of seven identical skyscrapers that dominate Moscow’s skyline.

In Moscow, the sheer volume of sights to see was not the only thing driving the relentless pace of our exploration: Alex, our guide and, in our opinion, probable ex-KGB agent, was not one for dawdling. On our first day in Moscow we took in the Bolshoi Theatre, the former KGB headquarters in Lubyanka Square, the River Moskva, the Cathedral of Christ the Saviour, and Mosfilm, Russia’s answer to Hollywood, from the comfort of our chauffeured van. The word comfort is used somewhat loosely here – not only had the hot weather taken me by surprise, it appeared to have done the same to the van’s air-conditioning, which had ceased to function. We were dropped off at the Stalinist skyscraper which housed the administration of Moscow State University for a quick photo opportunity. “Let’s go, please,” Alex announced as we packed back into the van for our next destination.

We traipsed across Red Square, taking in St Basil’s, Lenin’s Mausoleum, and the GUM (what was once the Soviet ‘State Department Store’ is now a temple to consumerism crammed with high-end boutiques), then were swept off to the Tretyakov Gallery – “Let’s go, please”.  After a tour of the gallery (which was magnificent, but somewhat overwhelming given the volume of what we’d already taken in that day), we made a beeline for our hotel. A well-deserved nap ensued.

Soviet kitsch in the GUM.

The following day continued in much the same way. We whirled through the Kremlin (“Let’s go, please”), gawped at the priceless treasures of the Diamond Fund (“Let’s go, please”), and were followed down the street by an angry man in a panda suit because we didn’t want to pay for a photo (very much “Let’s go, please”). That afternoon we farewelled the voluble Alex (in my case, secretly breathing a sigh of relief on behalf of my complaining feet) and boarded the train to St Petersburg.

It was on this train that I glimpsed perhaps the most telling scene of my Russian adventure. As we sped through the countryside I wondered about the real Russia – the Russia that didn’t shop at GUM or own a Ferrari (and believe me, there we enough Ferraris roaming the streets). It seemed that Russia, the Russia I saw as a traveller to the big cities, was as carefully curated as one of its astounding galleries: you could not help but be amazed at what you saw – the grandeur and sheer human scale of the monuments you encountered – but at the same time, the inner workings were well and truly hidden. Somewhere in the 650km between the two cities I spotted a tiny, rundown, wooden house hunched beneath a lone tree in the miles of green. Just a second and it was gone – my glimpse of the uncensored soul of the country. 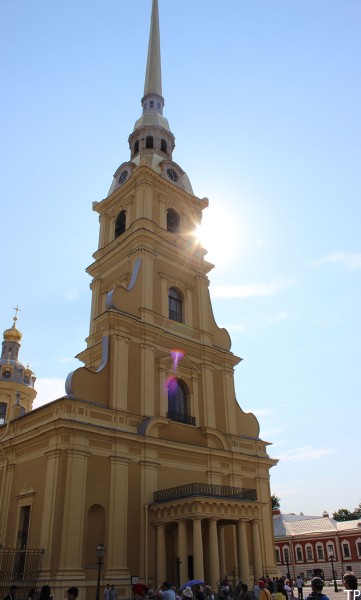 Arriving in St Petersburg it became immediately obvious that this was a very different city to Moscow. As the administrative centre of this vast nation, Moscow’s businesslike attitude permeated the fabric of the city. St Petersburg, Russia’s cultural capital, was visibly more relaxed. Perched as it was on the Gulf of Finland, cruise ships disgorged thousands of passengers every morning and rounded them up again as the day came to a close. Those hours between the departure of the hordes and the setting of the sun (at about 11pm each night) were the highlight of my stay – long-drawn-out dinners in the cooling evening air and wandering the streets in the long twilight shadows.

In St Petersburg our tourist whirlwind once again took off. We visited the airy Peter and Paul Cathedral, the Church of the Saviour on Spilled Blood, and St Isaac’s Cathedral, each staggering in both scale and colour – no boring neutral-toned churches here! We took in Catherine and Peterhof Palaces – both summer residences of the royal family at various times – and the ridiculously extravagant Hermitage Museum, its walls laden with Dutch masters, French Impressionists, da Vincis, Caravaggios and Raphaels. 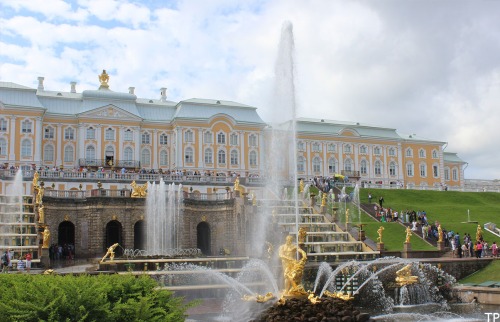 The magnificent summer palace of Peterhof.

Each day was exhausting. Russia throws hundreds of years of history and culture at you at every corner and expects you to keep up. In these two cities alone was far more than could comfortably (or uncomfortably) be covered in a week. The past excesses of Russia, in the form of palaces, churches and works of art, collided with modern excess packaged as supercars, high fashion and infamous celebrity. Middle- and lower-class Russia were nowhere to be seen.

It was in St Petersburg that we found the restaurant called ‘The Idiot’. It was very respectfully named after a book by Dostoevsky, though that didn’t stop the younger members of our party having a giggle. We were each presented with a shot of vodka before the meal – a reminder that, despite the 30o days, we were in a country that required excessive consumption of said spirit to keep warm in the frigid winters. After we ate, we wandered. The streets were finally growing cool after another sweltering day and we meandered from street to street, crossing each canal we came across and taking in the twilit air of this nation that defied expectations.

Nevsky Prospekt: St Petersburg’s Champs-Élysées. On this particular day, workmen had just finished re-tarring the road and it was still closed to vehicles, though not excited pedestrians.

Cover photograph: The gates of the Catherine Palace, just outside St Petersburg.

What do you think? Cancel reply