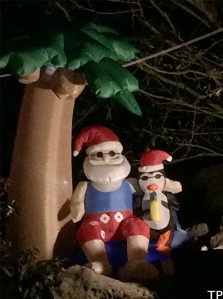 Santa decides to dress appropriately for the weather.

Australia’s December climate is not really the most Christmassy, in the traditional short-days-and-snow kind of way. Down here we know Christmas is coming when the days are getting longer, the pool is warm enough to swim in and the beach beckons! It’s easy to see, then, why some of the more Northern-Hemisphere-orientated Christmas traditions don’t work all that well in an Australian summer. Snowmen and mulled wine are definitely out, as are huge, hot meals, gathering around the fireplace and “I’m Dreaming of a White Christmas” (though my family persist in having a steaming hot pudding as the finale to Christmas lunch each year, even when the temperature’s pushing 30oC).

Fortunately, some Christmas traditions work equally well no matter what hemisphere you’re in, and Christmas lights are one of them (we just have to wait until the sun goes down at around 8pm before we can see them). This is where Borgnis Street comes in. This little suburban street in Davidson, just inland of Sydney’s Northern Beaches, has, without a doubt, the most amazing and extensive Christmas light display in Sydney.

Giant snowmen do still make an appearance, despite the complete lack of snow.

The uninvitingly-named Borgnis Street’s Christmas lights are slightly different to most. These lights function as a fundraising attraction for Bear Cottage and the local Rural Fire Brigade, complete with a corporate sponsor and volunteers collecting gold coin donations from those who’ve come to wander along the street and marvel at the time, effort, and electricity that’s gone into lighting up every single house. The light displays are astonishing – everything from snowmen to nativity scenes, kangaroos and Christmas trees are represented here. To be honest, I’d hate to see their electricity bills afterwards, but hey, isn’t that what corporate sponsors are for? Huge inflatables also make an appearance, and two ice-cream vans are stationed in the street to feed peckish patrons. The fire station at the end of the street even allows visitors to climb aboard their decked-out fire engines. 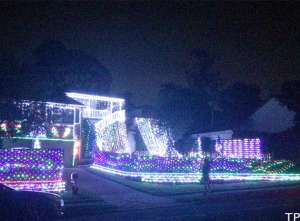 Every house in the street was bedecked with lights from top to bottom.

When I visited this year, around 9.30pm on a Wednesday night, small groups were still wandering up and down the street, but it was nothing compared to my visit last year, which was on a Saturday night – huge crowds filled the street entirely then! Clearly if you’re keen on atmosphere and over-the-top festive spirit, a Saturday is the night to go, but weeknights are preferable if you’d rather a little peace and quiet as you marvel at the lights.

I’d like to join with the residents of Borgnis Street in wishing you a very merry and blessed Christmas that is filled with light and joy!

When Jesus spoke again to the people, he said, “I am the light of the world. Whoever follows me will never walk in darkness, but will have the light of life.” – John 8:12

What do you think? Cancel reply